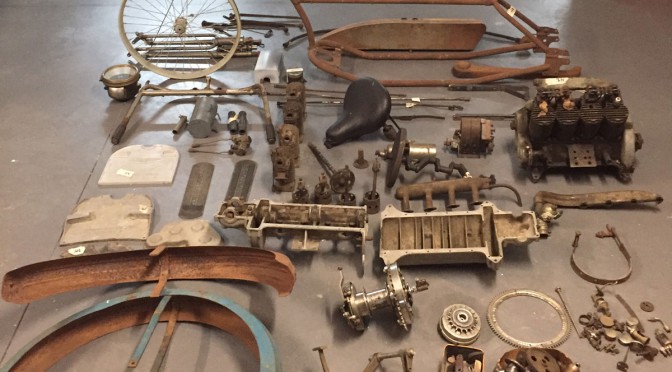 This very early 1914-15 detroit model Henderson ‘long-tank’ project is an extremely rare and desirable collection that Kevin had been building on for many years. It includes an original hub in near perfect conditon, a complete original engine with carburetor attached and the parts for a second engine including manifolds. The fenders/mudguards are original along with the handlebars and various other parts. We are including a magneto, headlight, seat and early Corbin speedo with long cable. Once restored, this will be one of the world’s rare and desirable motorcycles.

Note that the front forks were made approximately 15 years ago and it is likely that Kevin built the tank. It is possible that the frame is one that Kevin modified from a slightly later model (extended to make it longer, see photo). The footboard has been recently cast.

This collection is being sold as seen in the photographs. There will be no viewing as the parts are now in storage.

This is being sold under blind auction. There has already been interest in this collection so we expect serious offers only. Please email us your offer in $AU by the 17:00 (AEST) deadline of September 30th, 2016 to [email protected]

More information about this process can be found on the How to Purchase page.  As usual, this is a ‘blind’ auction so we do not publicize the offers we receive or the sold price so please do not ask us for this. 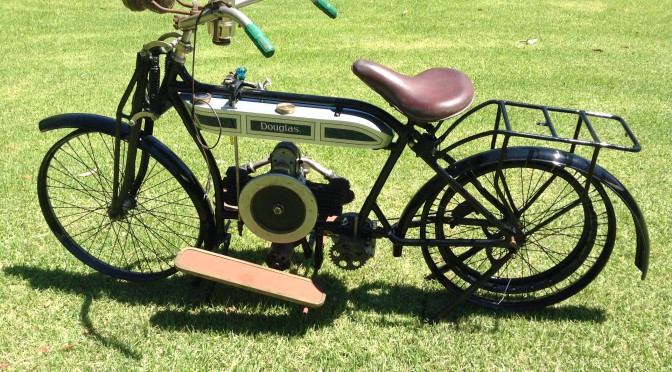 This is a veteran Douglas motorcycle that had been bought by Kevin as a complete bike. It was subsequently partly disassembled as he commenced work on it. He had worked on the engine and tank and these have now been put back into the frame for these photos. Other parts and spares are in the accompanying crates and incudes additional cylinder barrels, unused tyres (for display), a second veteran magneto, 1914 gearbox case, Douglas nuts and bolts, mudguard stays, reproduction pannier cases, headlight stay clamps, newly nickeled levers etc.

The frame on this bike is dated as 1915 and the engine number is consistent with 1914.  It will require some work to get it on the road including a fix on the central shaft of the handlebars,  attachment of the front brake, sourcing of footboard holders, restoration of the headlight stays etc. However, most of the major parts are present and in good condition.

This is a lovely little veteran project and will be a great bike for rallies when it is completed.

Please note that there is only one carburettor- the one shown attached to the engine is the same one in the parts display photo. 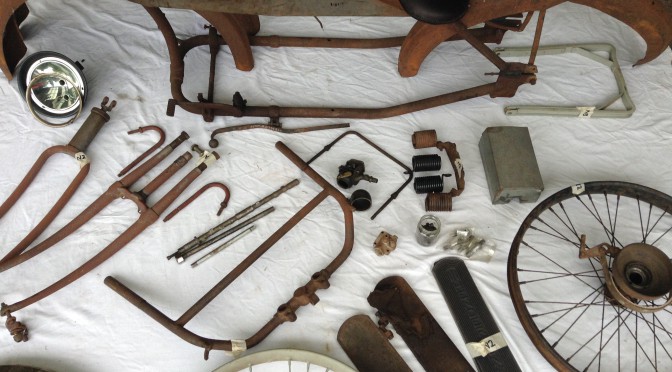 The Henderson factory was established in Detroit and started producing Henderson motorcycles from 1912. In 1917, the Henderson brothers sold the company to Schwinn and manufacture was later moved to Chicago. The G model was produced prior to the move, making it popular amongst those who collect Detroit models.

The 1917 Henderson was also a record breaker, breaking “Cannonball” Baker’s transcontinental record (across America) that had been set two years earlier on an Indian Twin. Hendersons are considered by many to have been the fastest bikes of the era and with this also classed as a veteran motorcycle in Australia, a G model Henderson is a particularly special motorcycle to own .

This is now open for offers as per our blind bidding system.  Our deadline is at 17:00 AEST on Saturday 07/03/15. Please read our instructions on the link above and email any questions you may have to [email protected],com. Please also include your phone number.

In some circumstances, we can arrange a Skype/FaceTime/google video call viewing ahead of the deadline day. Please contact us at least 48 hours ahead in order to arrange this.

We often get asked by bidders to help them with ballpark figures and we suggest that people do some research and look at what similar bikes are selling for. As a project, we obviously do not expect bids to be as high as a running bike would receive but please be aware that a veteran Detroit model 1917 Henderson, even as a project, will be a particularly collectable bike.

We tend to suggest you simply offer us the price you are prepared to pay. We also say that you shouldn’t be put off making an offer by assuming you will be beaten. You never know – you may have the winning bid!

Please follow this page to get email updates if you are interested in this bike. The link is at the bottom of the page.